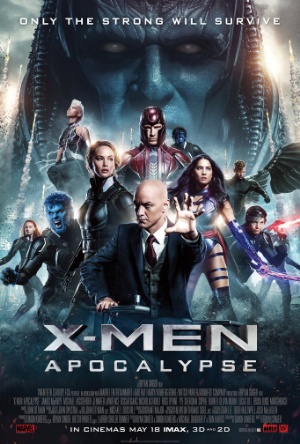 Marvel has nailed it again with X-Men: Apocalypse! (Don’t worry, no spoilers.)

Marvel is having a great year, churning out one hit blockbuster after another. Starting with The Avengers: Age of Ultron and most recently, X-Men: Apocalypse.  My favourite being Deadpool!

What Apocalypse is about…

It starts with what appears to be a monolithic dedication to a god and his four disciples in ancient Egypt.

This ancient and all-powerful god (Oscar Issac) presumably is the original mutant. Able to use or become any and all superpower. Well apparently even the ancient Egyptians knew this super mutant god was no good, because they bury him and his “Four Horsemen” deep within the very pyramid built to honor him.  The ultimate betrayal.

Fast forward to the 1980’s and there are several cults that honor this ancient mutant and CIA agent Moira McTaggart (Rose Byrne) uncovers the one that actually knows where the God is and how to free him.

This ancient evil is released and wastes no time recruiting his new “Horsemen.” Young Storm, Psylocke, Angel and a very angry Magneto (Michael Fassbender) are rounded up and enhanced to help carry out the entire annihilation of mankind, with the exception of the powerful mutants that can survive it.

Apocalypse is a fantastic follow-up to critically acclaimed Days of Future’s Past.  To be honest, I liked it a while lot more.  I love the origin stories of Cyclops, Jean Grey, Nightcrawler and Quick Silver.  Portrayed by Tye Sheridan, Sophie Turner, Kodi Smit-McPhee and Evan Peters.

One of the best scenes in the whole movie features Quick Silver (You’ll know it when you see it) and Jennifer Lawrence, James McAvoy and Nicholas Hoult reprise their roles from Days of Future’s Past and continue to do an admirable job as the original X-Men.

There is a ton of action, thrills and special effects that will blow your mind. I think this particular movie will appeal more to the comic fans but it is still an exciting film for your average sci-fi fan. There is even a surprise cameo (don’t worry, I won’t say) who adds another fantastic dimension to this movie, while setting up for another.

If you’re an X-Men fan than this will be money well spent. Trust me!