Schlock! is a weekly webzine dedicated to short stories, flash fiction, serialized novels and novellas within the genres of science fiction, fantasy and horror. They publish new and old works of pulp sword and sorcery, urban fantasy, dark fantasy and gothic horror.

In this week’s installment, one man seeks to halt the momentum of the universe. Illara plays games with Carter Ward. Richard Burrell sets out to cheat a few hicks when he settles his late grandmother’s affairs but winds up going on an unexpected journey. A customer complains about a dire series of incidents resulting from his purchase of a robotic clone. And Hans and Ava enter the Hexa dimension.

There is mention of a new anthology from Grey Matter Press, followed by a classic Cthulhu Mythos tale from the savage pen of Robert E Howard. Meanwhile, Professor Aronnax awakes to find the Nautilus inside an extinct volcano. And in the Witch Wood, the hunt is on. 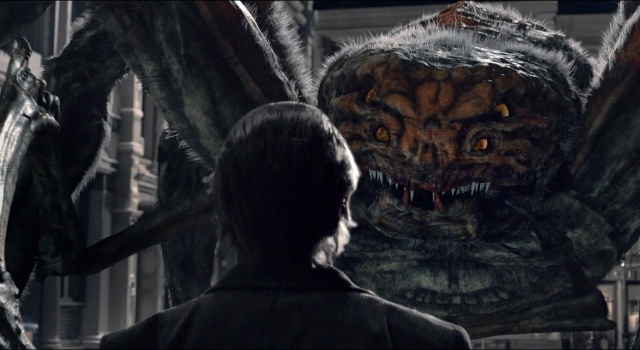 I stumbled upon this webzine when searching for some writing by Leo X. Robertson and found one of his sci-fi short stories “Covered in Bugs” had been published here. His story was one of the shorter ones, but the imagery and his descriptive language caught my interest. In fact, I wished his tale was longer, with more elaboration regarding the world he created and more background regarding the two main characters.

Another one of the pieces I thoroughly enjoyed was “Customer Complaint Concerning MiLife Model #209.” Although I have read other similar pieces that explore the complexity of artificial intelligence, this one had all the right stuff—quick pace, succinct details, and a thread of humor. It was a fun read.

“The Black Stone”, 20,000 Leagues under the Sea, and Witch Wood are classics included here. The latter two are reprints of single chapters that have been serialized in this publication. What I like about this is that it either introduces these works to readers, or allows them to appreciate them for an additional time. It’s interesting to see how the writing styles of the past differ from the current stories being written today. The serialization is also a nifty gimmick to maintain subscribers.

I recommend this webzine for sci-fi, fantasy, and horror fans, as well as writers. The blend of genres and mix of traditional as well as new authors make for amusing reading, while the occasional call for submissions and the editing services offered by the editor can be quite handy for writers.

Just the thoughts and ramblings of another book addict. 📖