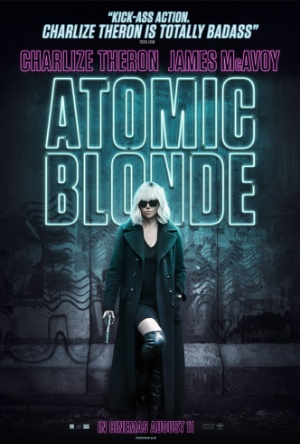 I have been waiting to see this movie, for what feels like forever!

But it was so worth the wait!

An undercover MI6 agent is sent to Berlin during the Cold War to investigate the murder of a fellow agent and recover a missing list of double agents.

*Based on the graphic novel, “The Coldest City” by Antony Johnson

Oh man, what a ride!

Okay, first it’s worth mentioning that this isn’t just a “spy” movie. It’s an excellent portrayal of the political climate of the time period, and the historic movement to bring down the Berlin Wall, is the backdrop of the entire film. The way they do it is, pretty frikin awesome too.

On to the film though. Atomic Blonde is based on a British graphic novel and the cinematography reflects that throughout. The colours, camera angles, even the type fonts during the credits pay homage to the book and the time period. I am of course talking about the 1980’s, a time of great excess, fantastic music and self-expression. Also, the ending of the Cold War, and judging by the kind of espionage depicted, it did not end with handshakes and frosty smiles.

Charlize Theron is brilliant! I love this lady. She is seriously talented and I admire her chameleon like abilities to become the most unlikely of characters. In this case, she is a hard-core bad-ass. Everything from her demeanor to her chain covered stilettos, convey a woman made of icy steel. An agent you would not want to mess with.

The movie as a whole is rife with action, sharp wit, and so many unexpected twists. Even when you think it’s the end, and you know what happens, you will be surprised.

Truly a fantastic film, Atomic Blonde is worth the ticket price and then some.

Bonus: The soundtrack is fantastic!