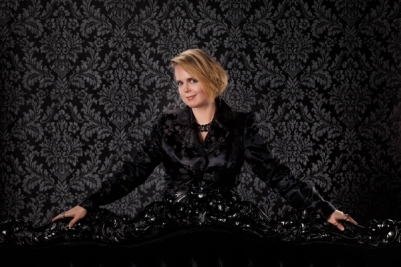 Author interviews are just another part of the job for us bloggers but this one is a little more unique.

Firstly, the interview-ee is none other than our very own Theresa Braun. Secondly, she is being interviewed by a fellow author, contemporary, and master of horror, Calvin Demmer. That’s pretty cool if you ask me.

Without further ado, here is a little Q & A for your reading pleasure and details on the latest from both of these very talented writers.

“Lost Time” was based on a story my dad told me when I was growing up. He was driving on a back road on his way home and saw this broken down car. When he slowed down to see if the motorists needed any help, he realized they weren’t human. He described them as wearing black cloaks and being pale with large heads. I remember being so scared, but at the same time fascinated—so much so that I wrote one of my first research papers (in 8th grade) on aliens. To me, it makes sense that we aren’t alone in the universe. I think what’s so interesting is that we don’t have many answers even though there have been so many reports of different types of aliens, not to mention tons of UFO sightings. The not knowing is what keeps the interest alive, I think. And, to go back to my father’s story, he recently mentioned at a family dinner that he doesn’t even know exactly what happened to him that night on that back road. He sort of blacked out and knows that he lost time that can’t be accounted for. That’s what prompted me to write about it. It’s terrifying to wonder what transpired during those minutes he was alone with those extraterrestrials. Next question…

The utmost thrill is that minute an idea pops into my head and I’m like: that would make a great story. A runner-up feeling would be clicking ‘save’ on the computer when the final edits are done. It’s the in-between writing and polishing that can be frustrating. Drafting and ironing out details can literally be a state of insanity. However, when the war is won, it’s extremely rewarding to have stuck with the process to get to the finished product.

“Heirloom” contains several elements that interest me. Past lives and how they might affect our present existence is something I think about. And then there’s also the idea that we are constantly evolving and often change to fit the circumstances and dynamics around us. On top of that is this interconnectedness we have with others. I wanted to explore those things, as well as the complexities of empowerment. What does it mean to have power in a given situation or over another person? Does that trump other qualities such as emotional intelligence or empathy? That’s what I set up for my main character, who’s a therapist. Enter a magic mirror (because the supernatural is always fun) that sends her into the past. Add a difficult client who not only threatens her in present day, but also has a role in the past. How does it all play out? Well, that’s the story.

That story came out of a writing workshop in Transylvania a couple of years ago. Visiting Bran Castle and following in the footsteps of Vlad the Impaler was a lifelong dream of mine. But that was just the beginning. One of the places we visited was the Iulia Hasdeu Castle that’s rumored to be haunted by the daughter of the original owners. She died at a young age and her parents built a spirit room where they reportedly continued to talk to her on the other side. I sat in that very spirit room and really felt connected to what might have been her ghost. I can’t really explain it, but there was something peaceful and inspirational in that place. Suddenly I wanted to write a story about a manor that housed something supernatural. Then I wondered what it might be like to grow up in Romania with all that folklore and talk of vampires in your consciousness. What might it be like to try to have a normal life and fall in love? I didn’t really intend to write a vampire story, but that’s what ended up happening.

Oh, dear. I won’t be able to do this list justice, as there are so many female horror writers that deserve praise, both past and present. I’d like to mention Ursula K. Le Guin in light of her recent passing. Even though she falls mainly in the fantasy and science fiction genre, some of her work has a darkness to it. My favorite of hers is The Lathe of Heaven. Off the top of my head, here’s a list of some others who should be read: Daphne du Maurier, Joyce Carol Oates, Anne Rice, Shirley Jackson, Kelly Link, Lisa Mannetti, Mercedes Yardley, Nicole Cushing, Gemma Files, Helen Oyeyemi, Mariko Koike, Tananarive Due, Lisa Tuttle, Gillian Flynn, Gwendolyn Kiste, and on and on. Seriously, there are so many more worth mentioning. There’s no shortage of talent out there.

Guys! You have to check out these authors if you don’t know them already!

Theresa Braun was born in St. Paul, Minnesota and has carried some of that hardiness with her to South Florida where she currently resides. Traveling, ghost hunting, and all things dark are her passions. Her work appears in The Horror Zine, Sirens Call, Schlock! Webzine, Hardened Hearts, and Strange Behaviors, among others. 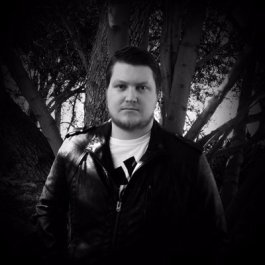 Calvin Demmer is a dark fictio!n author. His work has appeared in Broadswords and Blasters, Empyreome Magazine, Mad Scientist Journal, Ravenwood Quarterly, Switchblade, and others. When not writing, he is intrigued by that which goes bump in the night and the sciences of our universe. You can find him online at www.calvindemmer.com.

Dying For An Invitation

What is The Society of Misfit Stories? These are stories often trapped in the forsaken shadowlands of the publishing industry: too long for traditional magazines and journals, but too short for print. Launched in 2016, The Society of Misfit Stories provides a loving home for longer short fiction. Each entry in the series is a stand-alone tale from talented new and established voices in a wide range of genres.

A young woman returns to her hometown in Romania to find that an invisible friend from her childhood may have been much more than a figment of her youthful imagination.

The Society of Misfit Stories Presents…Volume One is available in digital, paperback, and hardcover formats and features the stories first published in 2016.

17 stories of difficult love, broken hearts, lost hope, and discarded truths. Love brings pain, vulnerability, and demands of revenge. Hardened Hearts spills the sum of darkness and light concerning the measures of love; including works from Meg Elison, author of The Book of the Unnamed Midwife (Winner of the Philip K. Dick Award), Tom Deady, author of Haven (Winner of the Bram Stoker award for Superior Achievement in a First Novel), Gwendolyn Kiste, author of And Her Smile Will Untether the Universe and Pretty Marys All in a Row, and many more.
Hardened Hearts dips from speculative, horror, science fiction, fantasy, into literary and then out of the classifiable and into the waters of unpinned genres, but pure entertainment nonetheless.