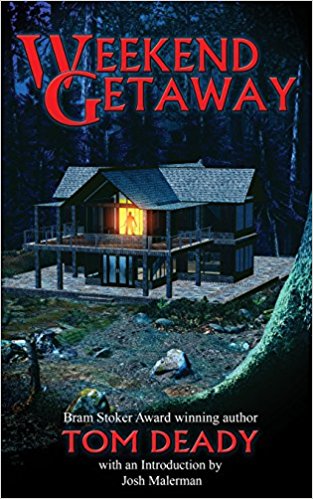 A marriage shattered beyond repair?

John Baxter doesn’t think so, which is why he has planned this weekend getaway with his wife. He expected a lot of shouting, a lot of tears, but in the end, he hoped to have a stronger foundation upon which they could start rebuilding what they had once had.

What he wasn’t expecting was the home invasion……and the hell that awaited them beneath the rented cabin.

I challenge readers to not finish this book in one sitting. It’s next to impossible. Deady accomplishes quite a bit in this short, lightning speed read. To start, the protagonist is flawed but likeable. Furthermore, the story opens the present, but flashes back and forth to that horrific weekend. With a few twists and turns. You’ll be dying to find out what happens. That blending of time frames is difficult to pull off in such a fast-paced book. Deady is able to do it well.

One of the things I really liked was how Deady toys with the reader a bit. For example, we’re introduced to a truck full of assholes in the beginning. The question is whether or not they’re the ones the married couple needs to fear. They factor into the scenario, but not how we expect.

In an effort to not give everything away, all I’ll tell you is the couple winds up in the cabin’s dungeon at the hands of a madman. And, with other victims in there as well. Where they come from and who makes it out alive, I won’t divulge. Like, that’s the whole point of the book. What I will tell you is that I was going to write up an aspect of the plot that I thought Deady was giving away too early. But as I read on, the joke was on me. Something I should have seen coming, surprised me. And it was this that made the novel for me. Sure enough, when I thought back to the subtle foreshadowing, I was like: nicely played, Deady. Nicely played.

Some nit-picky critique. To begin with, the wife’s big reveal during their captivity could’ve been dealt with in more depth. That’s all I will say about that. Also, I would’ve liked to have seen a bit more of a transition from the protagonist’s getting out of the cabin and living to tell the story. I’d like to discuss this further, but it would involve too many spoilers. I realize that angle of the novel could be a book in itself, but I still wanted it more fleshed out. The other thing is I craved a more complex villain. He’s got a psychological disorder, one we’ve seen many times in other storylines. I think I was jonesing for something else to be making him the way he is. Again, this is all minor stuff. Anyway, sometimes evil is evil. It can’t be explained. I was able to roll with it.

In short, I enjoyed this book. It might be your gateway drug into more of Deady’s work. And this one is available with Kindle Unlimited. Have at it. It’ll go by so fast, so you might have to read it again.