I know Fall doesn’t officially start for another few days, and it’s still scorching out, but that doesn’t mean I’m not looking forward to it. Fall is my absolute favourite season! I love everything about it, the weather (usually), the colours, crunchy leaves under my feet, cozy sweaters, the smells, the food, and Halloween!!! You know, just to name a few.

It’s also the best time to read! New releases are a plenty and cold, blustery days are the perfect excuse to curl up with a book. In celebration of my favourite time of year, I’ve got a list of books that I want to read.

The Mouth of the Dark by Tim Waggoner

Jayce’s twenty-year-old daughter Emory is missing, lost in a dark, dangerous realm called Shadow that exists alongside our own reality. An enigmatic woman named Nicola guides Jayce through this bizarre world, and together they search for Emory, facing deadly dog-eaters, crazed killers, homicidal sex toys, and – worst of all – a monstrous being known as the Harvest Man. But no matter what Shadow throws at him, Jayce won’t stop. He’ll do whatever it takes to find his daughter, even if it means becoming a worse monster than the things that are trying to stop him.

Presented by James Patterson’s new children’s imprint, this deliciously creepy horror novel has a storyline inspired by the Ripper murders and an unexpected, blood-chilling conclusion…

Seventeen-year-old Audrey Rose Wadsworth was born a lord’s daughter, with a life of wealth and privilege stretched out before her. But between the social teas and silk dress fittings, she leads a forbidden secret life.

Against her stern father’s wishes and society’s expectations, Audrey often slips away to her uncle’s laboratory to study the gruesome practice of forensic medicine. When her work on a string of savagely killed corpses drags Audrey into the investigation of a serial murderer, her search for answers brings her close to her own sheltered world.

I’m always the last one to read popular series’ like this one. I think I stockpile them on purpose so I don’t have to wait long for each installment lol.

The Chalk Man by C.J. Tudor 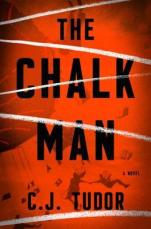 It began back in 1986, at the fair, on the day of the accident. That was when twelve-year-old Eddie met Mr Halloran – the Chalk Man.

He gave Eddie the idea for the drawings: a way to leave secret messages for his friends and it was fun, until the chalk men led them to a body.

Thirty years later, Ed believes the past is far behind him, until an envelope slips through the letterbox. It contains a stick of chalk, and a drawing of a figure.

Is history going to repeat itself?

Was it ever really over?

Will this game only end in the same way?

I feel like the only one left on the planet who hasn’t read this!

The Mansion by Ezekiel Boone

After two years of living on cheap beer and little else in a bitterly cold tiny cabin outside an abandoned, crumbling mansion, young programmers Shawn Eagle and Billy Stafford have created something that could make them rich: a revolutionary computer they name Eagle Logic.

But the hard work and escalating tension have not been kind to their once solid friendship—Shawn’s girlfriend Emily has left him for Billy, and a third partner has disappeared under mysterious circumstances. While Billy walks away with Emily, Shawn takes Eagle Logic, which he uses to build a multi-billion-dollar company that eventually outshines Apple, Google, and Microsoft combined.

Years later, Billy is a failure, beset by poverty and addiction, and Shawn is the most famous man in the world. Unable to let the past be forgotten, Shawn decides to resurrect his and Billy’s biggest failure: a next-generation computer program named Nellie that can control a house’s every function. He decides to set it up in the abandoned mansion they worked near all those years ago. But something about Nellie isn’t right—and the reconstruction of the mansion is plagued by accidental deaths. Shawn is forced to bring Billy back, despite their longstanding mutual hatred, to discover and destroy the evil that lurks in the source code.

I loved The Hatching series and I got those books super fast, but for some reason, the publisher declined my request. Not sure what I did as I gave his other books glowing reviews and my ratio is 94%. Not cool!

Set in an America where half the population has been silenced, VOX is the harrowing, unforgettable story of what one woman will do to protect herself and her daughter.

On the day the government decrees that women are no longer allowed more than 100 words daily, Dr. Jean McClellan is in denial—this can’t happen here. Not in America. Not to her.

This is just the beginning.

Soon women can no longer hold jobs. Girls are no longer taught to read or write. Females no longer have a voice. Before, the average person spoke sixteen thousand words a day, but now women only have one hundred to make themselves heard.

But this is not the end.

For herself, her daughter, and every woman silenced, Jean will reclaim her voice.

This one sounds really good, and I’ve seen it all over the blogisphere so now I need to read it!

I think this is a good start! I’ll save the really scary stuff for the end of October.

What about you guys? Which books are you keen to read this season?