When things get bad (or at the very least, odd like now) I found myself leaning toward books where the characters have it very, very rough. It makes me think, ‘hey, if they made it through, so can I.’ So, here are two stories I read that can fit into the category. One I really enjoyed. The other, not so much.

What Other People are Saying 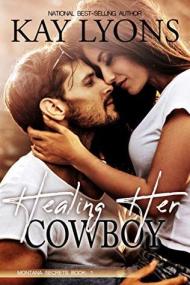 Healing her Cowboy by Kay Lyons

He was the one. The one she loved. The one she wanted but couldn’t have. Not without revealing the truth. That’s why she left. Why she’s stayed away. And why she has to return…

Seth Rowland doesn’t want her to see him like this. Of all people, why her? But Grace is relentless. Challenging. He never could resist a challenge. Or her.

2 stars – Great potential, but not a great delivery

I’m not sure. I mean, she really tested my patience. And not because she wasn’t sure about letting Seth in, she had very good reasons for it. But she went on, then packpadeled hard, always going around her fears and self-doubts. Again, she had reasons, but a good evolution of the character would have shown her reticence starting from the surface and then deeper and deeper, not running in circles always around the same (valid) issues.

I liked, an understood, how she treated him at the beginning.

I liked him. I understood him, and I liked his arch. It made sense, and it was right.

My only problem is, why did she marry his first wife? That part of his story was very grey. We know why everybody hated her, but not why he married her or, even more, why he stayed with her after he didn’t love her anymore (I guess he didn’t, or that’s the hunch I had from what I read).

What really left me baffled was the absence of a sex scene. Let me explain this one. I don’t need a sex scene to like the book. I loved many books with no such scenes. Also, it was an inspirational book, so I was warned, in a way. And it’s all good.

My problem was that Gracie’s trauma come from sex. The reason for her leaving Seth the first time, and then wanting to run away again, was because of that. It was her issue, the very thing she had to solve. Intimacy with a man, trust him enough to let her feelings flow along with the physical part of a relationship. So, not having that aspect resolved was, for me, a let-down. How did she manage intimacy after all she went through? We weren’t there with her when she lived such pivotal event in her life-love again.

It’s very legitimate for an author not writing intimate scenes. But then, if you know you don’t want to write it, maybe it would be better telling a different story, one that doesn’t move around intimacy.

The attempt rape by the ranch’s hand was a push. A stranger, maybe, but not someone who worked there. Too convenient.

What Other People are Saying

Kyra Aberdeen is a YouTube sensation. Her bubbling personality and fresh beauty capture her audience each week, but they don’t know the truth-she’s just faking it. Beneath the surface of light-hearted smiles is a simmering darkness threatening to pull Kyra under.

When Kyra moves to Canaan Island and buys her deceased mother’s childhood home, she hopes to confront the lurking shadows haunting her every step. But when she meets her grumpy contractor, even her best-laid plans start to unravel.

Hale Cooper is as brutally honest as he is intriguing. He hates fakers, and isn’t afraid to call Kyra on her false personality. Yet, she is drawn to him, and the unexpected attraction to a man who challenges her to be her true self lands her in unchartered waters.

But if she lowers her guard and allows herself to be honest with Hale, will the darkness creep in too?

*This book is recommended for mature readers due to some sexual content and language. Cutting is represented in this book, and scenes may be considered triggering to some.*

I really liked this story.

Underdogs that stick together.

Good way to handle the problem (I read some other review saying it wasn’t deep enough, well explained enough… it’s fiction, people. If you want something deeper of more precise, get a manual on the problem, not a novel). I really felt close to her.

I wish the issue with grandma wasn’t overcome not this easily, because it wasn’t, but this happily and  this quick. So many years of hate and habit to a certain way of being (quoting, a bitch), well, it’s hard to see them changed after one screaming match. Maybe some steps forward to give the heroine and us hope, but especially because there are more books in the series, this (smaller, all considered) issue could have been completely solved in a subsequent book.

Beach bum and country music addicted, Viviana lives in a small Floridian town with her husband and her son, her die-hard fans and personal cheer squad. She spends her days between typing on her beloved keyboard, playing in the pool with her boy, and eating whatever her husband puts on her plate (the guy is that good, and she really loves eating). Besides beaching, she enjoys long walks, horse-riding, hiking, and pretty much whatever she can do outside with her family.
Find me:
The best way to know me is through my website (and the books I host): http://www.viviana-mackade.blog/

From the cold Canadian border, the US1 runs along the east coast with patience.

Throughout its 2,369 miles, it braces itself in the northern winters, sighs with pride in Richmond. It falls west in the Carolinas, to stroke the great smoky mountains with loving eyes. And it’s south, still south, through the marshes and plantations of Georgia. Finally, it indulges in sun, white sand, and oranges.

Not the fastest way, sure, but if you have time to drive it all the way down, you might find yourself lost in one of the coastal towns that dot the US1 like little jewels.

These are the stories of its people.

*novels have returning characters, but can be read as a standalone*

ALL MY BOOKS ARE ON SALE AT 99 CENTS ON AMAZON!

One thought on “Healing her Cowboy by Kay Lyons & Fakers by Meg Collett #Review by Viviana MacKade @ViviMackade (PSSST… All of Viviana’s #Books are on Sale for $0.99 on #Amazon Right Now!) #BookSale #BookReview #Romance”