Happy publication day to Kate Anslinger! Check out her new book Chasing Ghosts (A Grace McKenna Mystery Novel) and get yourself a copy of this beauty today! 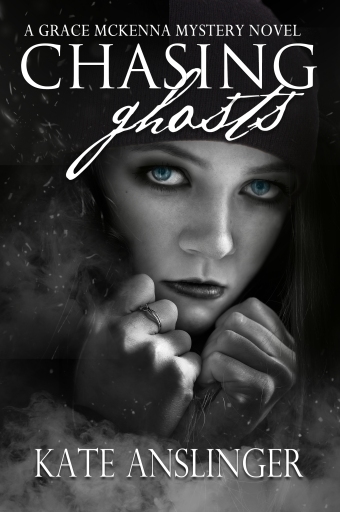 What would you do if you could see haunting images in a criminal’s eyes?

Detective Grace McKenna’s mother has always told her that she has a gift.

When she looks into a criminal’s eyes she can see haunting images of victims who have been wronged.

One of those visions is the face of Jenny Silva, a high school art teacher who has gone missing from the small town of Bridgeton, Massachusetts, where Grace works.

When she makes eye contact with the possible suspect, Jenny’s tortured face flashes before Grace, leaving an unsettling imprint on her.

Grace finds herself making tough decisions to solve a case on her own, where she stumbles across town secrets and gets mixed up in an unlikely love affair.

Sometimes a wrong can find a way to be righted all on its own!

Will Grace be able to solve this case on her own?

A set of beady blue eyes overpowering the face of a teenage girl tore Grace from the present moment. The girl’s mouth was contorted into an angry frown emphasized by black lipstick that matched her shoulder-length straight black hair. The skin on her chin and right cheek was dotted in bumps and covered in varying shades of red as if she had tried to cover up teenage acne. Her neck and collar bone area were covered in blue and red blotches that looked like fingerprints pressed into her skin. A black winter hat with a white bat was pulled down to her eyebrows, enhancing the eyeliner that dipped in smudges beneath her eyes. The dead ends of her hair sprouted out the bottom of the hat and hit the collar of a black and white flannel shirt. Her face, filled with fright, transformed into an Edvard Munch Scream print upon an orange and red wavy background.

A new instinct kicked in and without thought, Grace’s hand went straight to her stomach, holding it like she was protecting a glass snow globe from falling to the floor and shattering. And as soon as she recognized how she had executed a mama bear’s intuition naturally and without a second thought, it dawned on her just how challenging motherhood would be. The baby that was rapidly growing in her womb would always come between her and the victims.

If Charlotte noticed alarm on Grace’s face, she didn’t show it. Instead, she smiled and tilted her head to the side, introducing the woman next to her. “Amy, this is Grace, we met by the bathroom. And we just happen to be a couple weeks apart in our pregnancies.”

A marked pause interrupted the space between them before Amy spoke. With a shifty gaze, Amy’s eyes rose from Grace’s shoes all the way up to her hairline. “It’s nice to meet you, Grace.” Her words ended in a hiss as she dropped a pair of crossed hands on a set of crossed legs decorated in pressed khaki pants. A pale blue cashmere sweater held tight to her perky breasts and was offset by a crisp white collar that peeked out the top like bird wings. Her posture was awkwardly erect, as if she was one of those mannequins strategically placed in department stores, free of any natural slump.

Naturally, Grace was inquisitive about the connection between the two women. Amy looked too young to be Charlotte’s mother, but too old to be a supportive friend accompanying her to her appointment. An older sister? A cousin? Whoever Amy was, Grace was now aware that the woman was responsible for the harm of the teenage girl who showed herself in the vision. Just as the conspicuous silence following the introduction was about to get awkward, a nurse emerged from the hallway and called out a name. Grace turned to see an older woman in the pale pink scrub uniform, haircut and highlighted in a style that was popular in the mid-nineties, when Jennifer Aniston set the example with long, face-framing layers. The nurse scanned the room, and with some force behind her voice she tried again. “Charlotte Anderson.”

“Well, that’s me.” Charlotte started to push herself up off the chair, until Amy hopped up and reached an arm across her back, guiding her to an upright position until she was face to face with Grace.

“Easy there, Charlotte. Precious cargo.” Grace stepped out of the way as Amy guided Charlotte to the nurse, like a mother ushering her toddler. As the connected duo passed by, Grace recognized the embarrassment that had come to the surface on Charlotte’s face.

“I’ll see you around and if I don’t, good luck with your pregnancy.” Charlotte swiveled her head, locking eyes with Grace as Amy continued to shepherd her down the hall, keeping the two of them at a snail’s pace.

“You too.” Grace waved a hand, committing Amy’s silhouette to memory. 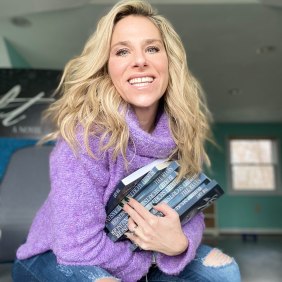 Kate Anslinger is the author of the McKenna Mystery novels, a series that follows Detective Grace McKenna on her spree of secretly solving crimes with the help of her gift to see clues in the eyes of criminals. In addition to her life as a novelist, Kate is a ghostwriter, editor, freelance writer and a veteran of the United States Air Force. Her debut novel Saving Jason, touches upon the struggles of PTSD, a topic that is near and dear to her heart. Kate lives on the North Shore of Boston with her husband, two daughters, and Newfoundland pup.