Check out the exciting next installment in The Legends of Everclearing series by Wendy L. Anderson, Arianne the Mistress! 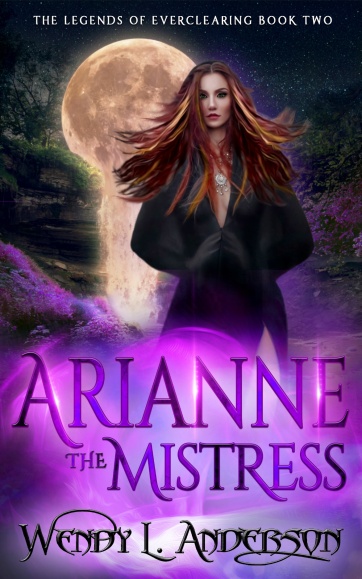 Arianne the Mistress (The Legends of Everclearing #2)

Arianne will stop at nothing to escape life as a prostitute, even committing murder.

She’s not just the mistress running a brothel, but a temptress and an alchemist. Arianne creates an addictive elixir that can bring pleasure or death.

Lord Torrent, her regular client, has secrets of his own, and once forced to reveal what is best left unknown, he has to leave her. Arianne quickly learns not everything is revealed and the truth is not always as it seems.

Running from the life she hates; Arianne avoids prosecution for her crimes and travels far across the sea to find forgiveness for breaking his trust and spurning his love. There were rules she broke, battles she lost, and triumph in surrender.

Blind hope drives Arianne to find out the truth as she faces the uncertainty of love while he faces a never-ending war. How far will she go to assuage a broken heart? As far as the legendary land of Everclearing?

Find out if trust can be regained, love revived, and redemption won.

Tonight, she was going to break the rules! Maybe not all the rules, but surely some of them. Well…maybe all of them. Some or all, it was a risk she was willing to take.

During the years Arianne had lived at the Maiden’s Bower brothel, she never had a client like him before. When he appeared the first time, he made his demands and made his rules. Why he always chose her and not one of the other girls to perform this service was a mystery. From the very first, he commanded that she follow certain rules of engagement. Yes, her life was just like a war. There were rules, battles, and surrender.

Her husband was the proprietor of the Maiden’s Bower. Arianne had been a young girl when they married. Marriage only meant that she no longer had to earn food and shelter on her back. Except for this one client who had requirements that, until now, she had willingly obeyed.

The story of her life was not a new one. When she was very young, her unwed mother sold her to the brothel’s owner, and she never knew her father. Arianne did not differ much from the other girls who lived and worked as prostitutes at the Maiden’s Bower. When she came of age she was put to work as one of them. One lesson she learned from a very young age was to trust no one!

Her husband was a louse whom Arianne only referred to as, ‘the Bastard’ and not by his given name which she deliberately forgot. He took a fancy to her. The Bastard taught her to read and write and developed an appreciation for her head for numbers and her skill with potions. Eventually, he forced her into marriage, though he was at least twenty years older than her. At the time, Arianne realized that there were advantages to the union. One of them was that she could help run the brothel and stop earning her living satisfying the customers.

Then, just when her desperation to escape was the strongest, Lord Torrent appeared. Tonight, Arianne was expecting him once again.

Killian the Assassin (The Legends of Everclearing #1)

Pagan drumming in Killian’s veins would never let his sword fail or his heart stop thirsting for blood. It felt as if the old gods gathered around him, waiting for blood to spill.

Killian the Assassin has been hired to guard the daughter of a wealthy Lord. Blackmailed into going on a perilous journey over treacherous seas, and among violent mountains, he faces danger and demons. Fighting the bloodlust that always follows him, Killian discovers a lonely, innocent girl who did not betray but has been betrayed. She deserves love and protection, but is he the one to give her what she needs?

Tainted by the need for salvation, driven by sword lust, darkness follows them as together they become the first in the Legends of Everclearing.

Killian the Assassin! He’ll double-cross you, bed your wife, and steal your gold, all with a smile.

Wendy L. Anderson is a Colorado native and mother of two boys. She has an English Degree from Regis University and writes books, short stories and poetry. Wendy is a devout reader of the classics, fantasy, sci-fi and historical fiction. She has decided it is time to write down the fantasies from her own mind. Writing about everything from fantastical worlds to the stuff of her dreams she takes her stories along interesting paths while portraying characters and worlds she sees in her mind’s eye. Her goal is to deviate from common themes, write in original directions and transport her reader to the worlds of her creation.