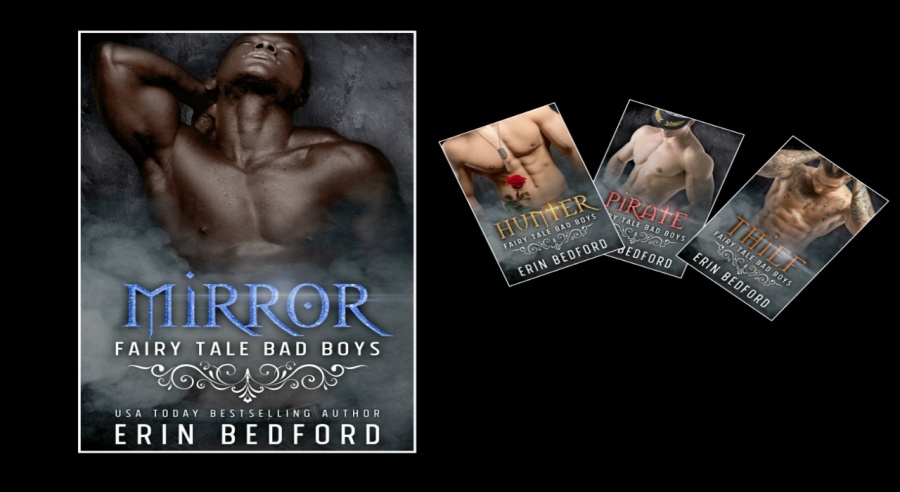 Mirror is the latest from Erin Bedford’s Fairy Tale Bad Boys collection and as Marie has found,though imaginative, they are not for everyone.

And that’s okay. It is one of the great reasons for having a fresh POV on Reads & Reels. We’re not all meant to like the same things.

Sometimes all the answers you need are right there in your reflection.

She moved from Nowhere, Pennsylvania to Hollywood with dreams to make her way to the big screen. What she found were dead-end jobs and her chances at stardom slipping through her fingers each day that passed. That’s until she finds herself house sitting her idol’s five thousand square foot home. She never realized how many secrets her idol had, including a devastatingly handsome man living in her bedroom mirror.

If he had learned one thing in all his four hundred years of life was never piss off the bosses. Trapped in a mirror prison for the last twenty years, Bane’s only thoughts were getting out and finding the daughter he had left behind. That all changes when he gets caught peeking on Blanche, assistant to movie idol Paulette Declare. Dangerously naive and a body that would make a eunuch pause, Bane doesn’t know what he wants more, to help her see the world for what it was or protect her from it all. Either way, he would have to find a way out and fast.

So imagine if Snow White were to happen now. In Los Angeles. Not just Los Angeles, bit Hollywood. Snow White is a young, pretty ingenue named Blanche (“blanche” means white in French) who works for an evil, aging actress named Paulette and everyone “in the world” knows that Paulette is a bitch who’s hired her assistant simply to keep her down. Keep her from becoming a successful actress in her own right.

This is the basic premise of Mirror by Erin Bedford. The rest of the cast is filled out by a troupe of gardeners. Buff, handsome brothers whose names all begin with the same letter; Guess how many there are? Yes seven, that’s right. And of course there is a mirror on a wall. But here’s where the story turns a bit. There’s a creature living in the mirror named Bane, who’s part of the Fae world; he’s been imprisoned inside and can only look out to the “real” world through the mirror. There’s also a Cheshire cat-like creature who can move between worlds at will; in fact, there’s an entire other world of Supernaturals who apparently share our Earth with us.

So that’s the set up, and it’s very imaginative and has a lot of potential. I really enjoyed the beginning of this book, and I liked knowing all of the above. But I realized when I was about three-quarters of the way through, that the story wasn’t going to go nearly as deep as I’d hoped, and while thinking this, I finished the book!

I’m not saying what I read was bad; everything there is fine. I was just hoping for more. More character development, more play off the cleverness of the set up, more action. I never really understood why Bane and Blanche were so drawn to each other , or why Blanche couldn’t see how horrid Paulette was, and I definitely needed more of the seven dwar–um, gardening brothers. Between the fact that they were all buff and had similar names, I couldn’t tell them apart. This book could have been twice as long, and it would have been twice as good, and twice as interesting too, because there’s so much material there that wasn’t mined. I felt like I was reading a skimmer version of the book. The world of the Fae could have had its own chapter, just for introductory purposes before the actual book began, I think. And we definitely could have used much, much more of Blanche and Bane interacting. And Paulette’s sneakiness and subterfuge would have benefitted from more page time as well.

So, this book works perfectly well as a snapshot of the characters, of the two worlds and everything that happens, but this reader can’t help but felt that more happened, or could have happened… around the corner and out of sight.